I didn’t want to spend years getting a narrowly focused Ph.D.

When Jennifer Fronczak graduated in 1999 with a degree in biology from Macalester College, she became a full-time bench scientist at PanVera in Madison. After the company was acquired three times, she realized she may have reached the ceiling as a bench scientist with a bachelor of science degree.

“I thought about getting a Ph.D. but I didn’t want to devote six years to a one-discipline path.”

Fronczak had decided that big corporations weren’t the best fit for her. “I wanted to work for a smaller company where I could wear a lot of hats.”

In 2002, she enrolled in the Master of Science in Biotechnology. “I really liked the part-science, part-business blend of disciplines. I wanted to be able to speak the language of many disciplines and take a leadership role in a company. It was what I needed to take my career to the next step.”

Fronczak, who also had experience at early stage products research at Bellbrook Labs and at the large research product firm of Invitrogen Corporation, looks back on the M.S. program and says it helped her in her current role of operations manager of Primorigin Biosciences LLC, a start-up company located in the MGE Innovation Center in University Research Park in Madison.

In June of 2006, Primorigin, a company that develops and provides technical support for cell therapy research products, was launched. The following month Fronczak became employee number two. For nearly the next three years she helped grow the company by leading various R&D projects, including developing the company’s infrastructure for its operations department.

In 2009, Fronczak once again sought greater responsibility in a small, but growing biotechnology company. After initially hired as a project manager and lead scientist at Platypus Technologies, Fronczak was promoted a year later to business unit leader. In addition to managing the company’s cell migration assay product line, her new role provides greater leadership responsibilities that include strategic planning, business development and project management.

Looking back nearly a decade since graduating, Fronczak says, “The M.S. Biotechnology Program put me ahead of the curve. It helped me position myself to take advantage of opportunities I previously could not have considered.”

This is an accordion element with a series of buttons that open and close related content panels.

Questions about the M.S. in Biotechnology Program?

“I specialize in helping prospective students understand the degree, how it fits their career goals and how to apply for admission.

About the M.S. in Biotechnology, UW-Madison

Established in 2002, the Master of Science in Biotechnology at UW-Madison is a two-year cross-disciplinary program for scientists, technical professionals, business strategists and attorneys seeking to advance their career in the biotechnology industry without having to put their career on hold.

The project-based curriculum focuses on the development and commercialization of new technologies and provides a diverse mix of science, business, bioethics, regulatory policy and patent law.

Students are instructed by world-renowned scholars and leading industry professionals in the biotechnology field. Graduates join a powerful professional network of over 350 alumni. 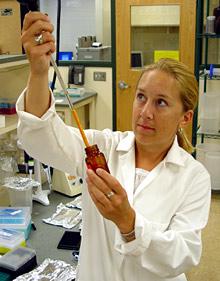