To better support people and their health, I needed a degree in line with today’s changing pharmaceutical industry.

Leaving Kenya in 1992 to pursue his education at the University of Wisconsin, Ahmed Osman’s plans focused initially on obtaining a degree in pharmacy. The technical knowledge he developed prepared him to excel in the field of pharmaceuticals. His memories of growing up in Kenya sent him on an entrepreneurial path that kept him close to home, even though he was a world away.

Recognition for creative thinking and service to community.

Osman worked as a retail pharmacist for several years in Minneapolis, MN, before opening his own pharmacy stores. His intention was to tap into a niche market of East African immigrants who would immensely benefit from his services. Osman uniquely understood the barriers standing between this population and quality healthcare. His business focused on providing exceptional care and proactively diagnosing critical illnesses. He began by providing free diabetic testing and blood pressure monitoring, eventually delivering free diabetic testing machines in collaboration with manufacturers of the devices. Within a matter of years, Osman’s efforts were recognized by area physicians as a welcome resource for the region’s healthcare needs.

This success led Osman to think about other arenas, especially in the areas of pharmaceutical exporting, repackaging and manufacturing in emerging African markets. To achieve these goals, he entered the M.S. in Biotechnology at UW-Madison in 2008.

Preparing for the future of pharmacy.

“The scope of the program – covering international patent law, business and regulation – made it very appealing to me. Biotech drugs being the fastest and maybe the only growing area in the pharmaceutical industry. I enrolled in the program to be ahead of the curve when a flood of these critical and newer forms of therapy hit the market place.”

Osman commuted to Madison from Minneapolis bi-weekly for two years, attending evening and weekend courses while continuing to build his career in pharmaceuticals. Osman’s immediate goals focus on navigating the world of biotechnology drug development in ways that can bring new innovations closer to all audiences.

“The drug discovery and operations courses have been critical to me in my work, in so far as understanding the role of FDA. My employer has currently asked its pharmacists what other experiences they could bring to the table. Most of the experiences they were looking for came directly from what I learned in the M.S. in Biotechnology Program.”

After graduating in 2010, Osman received a significant promotion as team leader of the executive pharmacy group at Target. 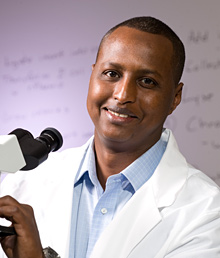 Questions about the program?

"I have questions about the MS in Biotechnology Program and would like to hear from a program director."